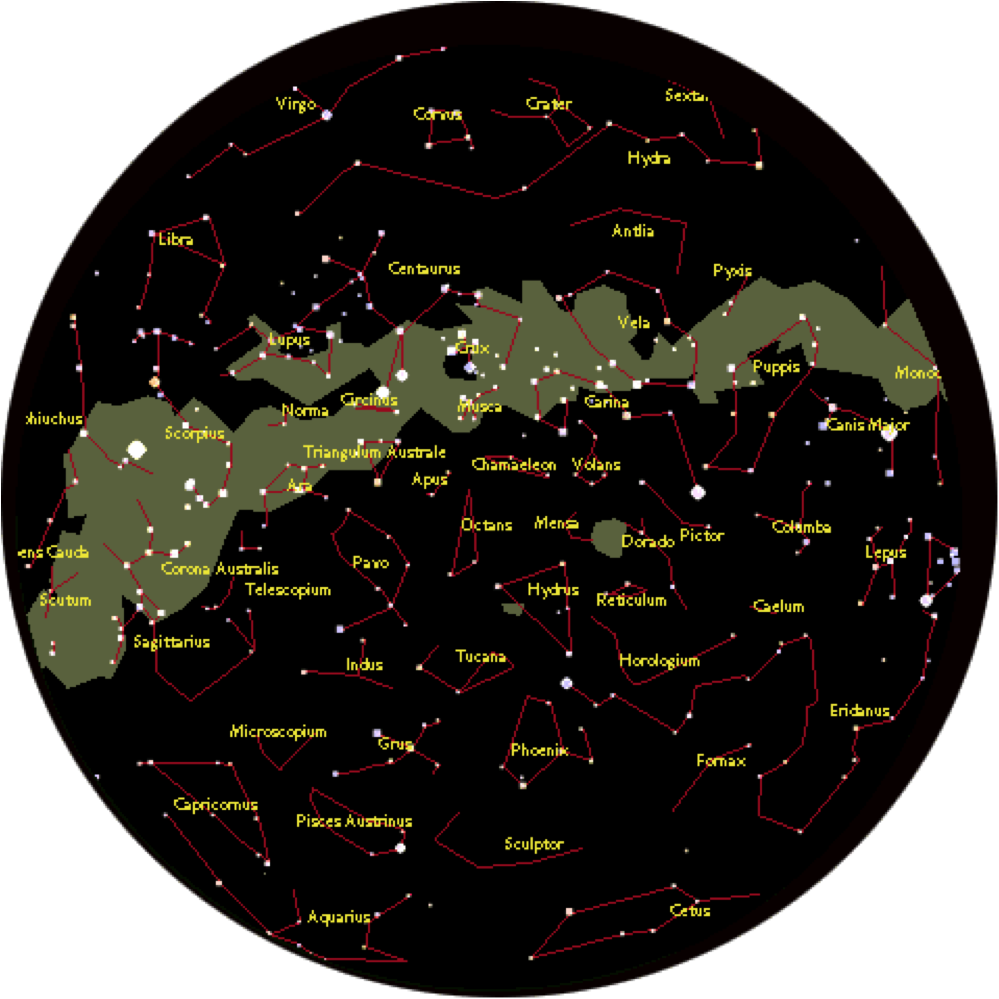 The Antarctic sky is quite different from the one we know in the Northern Hemisphere. The Big Dipper and the North Star are not visible from there. On the other hand, from that far-off continent one can see some constellations unfamiliar to us here in the north: Crux the Southern Cross, Tucana the Toucan, Musca the Fly and others.

Unfortunately for them, the inhabitants of the Southern Hemisphere don't have a "south star," like our own North Star, to mark the position of the celestial pole. In fact, it is purely by chance that the North Star (its real name is alpha Ursa Minoris) is located along the axis of the Earth's rotation. No star happens to be in the corresponding position in the Southern Hemisphere.

Why are the constellations "down under" so different from ours? Because the Earth is round, and the Antarctic is almost directly on the other side of the Earth from us. If the globe were perfectly transparent, like a glass marble, you could see the constellations of the Southern Hemisphere just by looking down between your feet. But our planet is rather opaque, in reality, and we cannot see them. We would have to follow Bernard all the way to the Antarctic to admire the southern skies.

But Bernard will see only one star during his Antarctic expedition: the Sun. That's right, the Sun is a star, and in November, it is the only one shining over the Antarctic. Have you ever heard of the midnight sun? In the Northern Hemisphere, above the Arctic Polar Circle, the Sun shines constantly in the sky for six months, from the equinox in March to the equinox in September. During this time, the Sun never goes down! For the rest of the year, though, the Sun remains below the horizon, and it is night for six months. Needless to say, the people who live in these far northern regions find the winter very long!

Exactly the same phenomenon occurs in the Antarctic, except that the seasons in the Southern Hemisphere are the opposite of ours. When summer begins here, it is winter there, and vice versa. So Bernard will be embarking on his expedition in the midst of the southern summer, when the Sun never sets over Antarctica. He'll enjoy daylight around the clock. Indeed, it's much better that way-had Bernard tried to make this climb in July, in the middle of the southern winter, he would have had to lug along a lot of batteries for his flashlight!

If Bernard had decided to set off on this adventure in the middle of the southern winter, though, what would he have seen in the sky? Here is a map of the sky as it appears in the Antarctic in July, in the depths of the polar night. It shows the sky as you would see it if you were lying on your back exactly at the South Pole and looking toward the zenith (the highest point above the horizon). Do you recognize any of the constellations? On the left, Scorpius the Scorpion seems to be standing straight up on its tail. On the right, you can see the lower half of Orion. And just above the centre of the image, the Southern Cross is leaning slightly to the left. 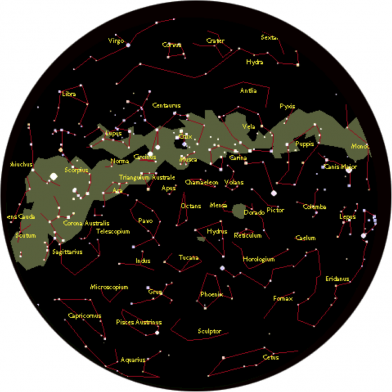 You can also see a shimmering grey band with ragged edges stretching across from one horizon to the other. This is the Milky Way, our galaxy, which we are seeing from our position inside the disc of our island of stars. Everyone agrees that the brightest and most colourful parts of the Milky Way are visible only from the Southern Hemisphere. The centre of the Milky Way is more or less in the constellation Sagittarius the Archer.

The two small grey patches near the middle of the image are the Small and Large Magellanic Clouds, two dwarf galaxies orbiting our Milky Way. The Large Magellanic Cloud is 163,000 light years from Earth; the Small Cloud is a bit farther away, nearly 200,000 light years. They owe their names to one of Bernard's forerunners, the famous navigator Ferdinand Magellan, who was the first to circle the globe, in 1520.