He was accompanied by his climbing companion Dorjee Sherpa Fulelee and Chwangba Nuru Sherpa. Just a small team, but a great success! Nathalie Tremblay co-ordinated the expedition from the base camp. 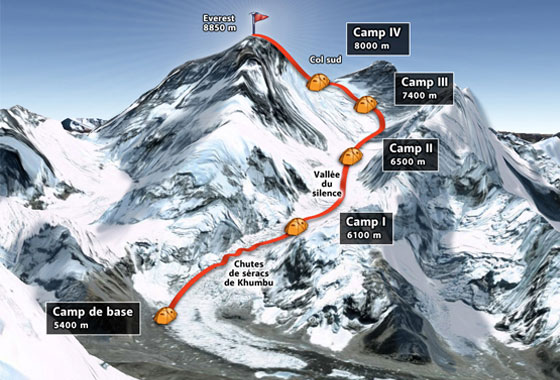 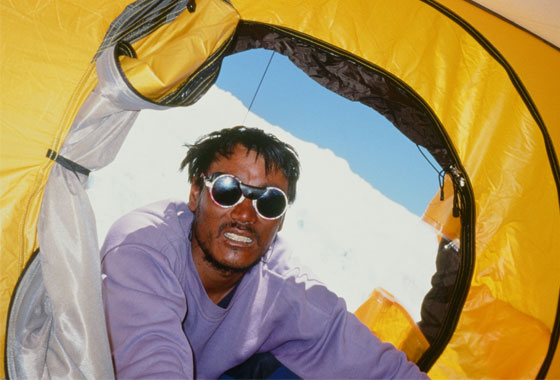 Dorjee is first and foremost a friend, Bernard's companion on his two Everest expeditions. One of the best mountain climbers, with six successful Everest summits to his credit, he was one of the key figures in making the famous Imax film on Everest. He lives in Phakding, a village along the trail leading to Everest. He is married, and has a son, Nima. After reaching the summit of Everest on May 5, 1999, Bernard and Nathalie invited him to come and spend two months in Quebec... It's wrong to think that "Sherpa" means porter. Sherpas are the people, originally from Tibet, who now live in most Himalayan valleys. 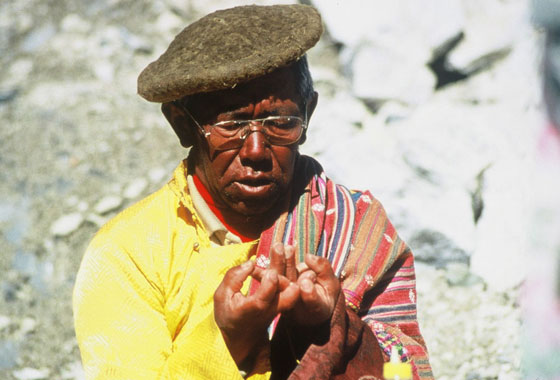 This Lama is someone quite exceptional. He has been at the Base Camp for all expeditions for over ten years now, and celebrates an important religious ceremony, the Puja, for each team. He is also in charge of the sherpas who install and maintain (ropes and ladders) in the Icefall between the Base Camp and Camp II. He blessed Nathalie too, who shares Bernard's life and co-ordinated the expedition from the Base Camp. Everything had to be meticulously calculated and planned, since each piece of equipment was essential. Her days were taken up with communications, video, photos and even watercolours. 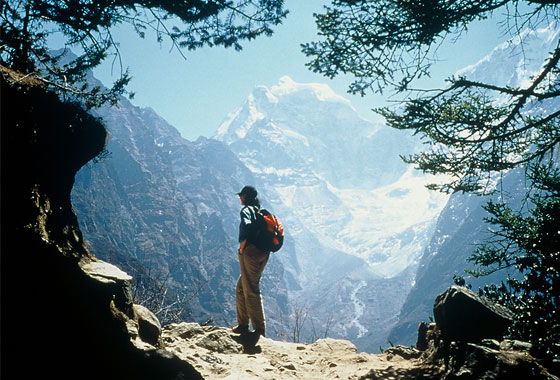 The Twin Otter lands in the village of Lukla (2 800m). It is said to be the most inclined airstrip in the world, at 30°! Lukla is the jumping-off point for Everest expeditions. To get to the foot of Everest, you have to trek. There is no road, but just a path of about 60km between the village of Lukla (2 800m) and the Base Camp (5 400m). All the supplies and equipment is carried by yaks and porters. On the trek, we discovered lots of villages, all set in breathtaking environments. Narrow trails, abrupt drop-offs and hanging bridges. No place for anyone with a fear of heights! 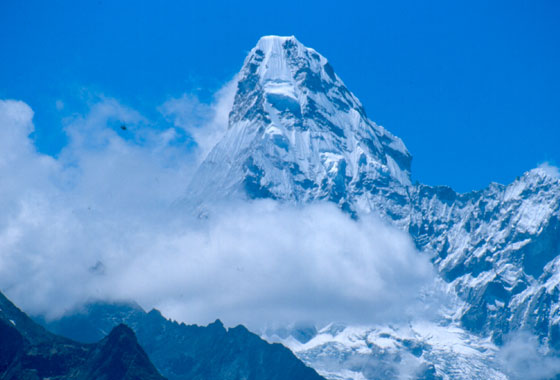 An exceptional view of the Everest massif. The Khumbu glacier has carved out the valley. The Base Camp is located just outside the curve of the glacier. This panorama can be seen from Kalapatar, the shoulder of Pumoni. We set up our tents on the glacial moraine of Khumbu. Using ice axes and picks, we manage to carve out a fairly flat space for ourselves. The stones lie on top of ice. The Base Camp becomes an international village where climbers from all over the world live side by side. At 5 400m, it is higher than the highest peak in the Alps, Mont Blanc (4 810m)! 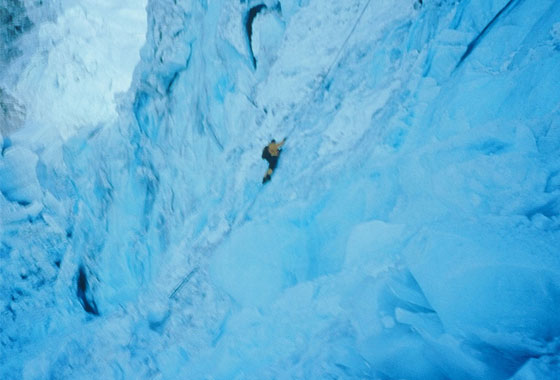 Between the Base Camp and Camp I, lies the notorious Icefall. The glacier is twisted and crisscrossed with crevasses, and huge blocks of ice called seracs, some the size of a building, topple over regularly. All the climbers are wary of this part of the route. Bernard had to cross it six times in 1999, and twelve times in 1997. One of the risks up in the high mountains is avalanches. They are dangerous and quite frequent on the Everest massif. Day and night, the rumbling created by avalanches of rocks and snow add a certain ambiance to life in the Base Camp. 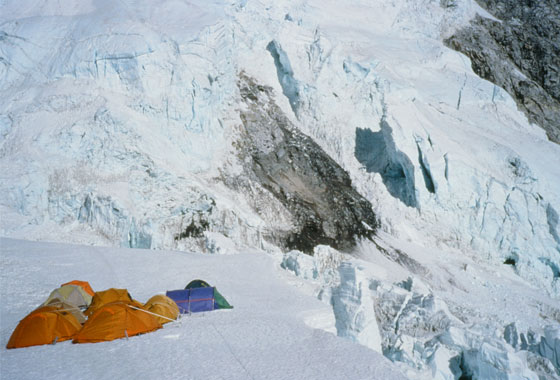 Camp I. Located at 6 100m, above the Icefall. The tents are set up on a wide serac, a huge block of ice that some day will tumble into the Icefall itself. At this altitude, there is only 50% as much oxygen as at sea level. A dozen ladders are set up to cross the crevasses. If one isn't enough, a second or third one is tied on. Most of the crevasses are deadly, and it's a slippery and perilous trip across the ladder, what with metal crampons slipping and sliding on the metal ladders. Since the glacier is constantly moving, ladders sometimes disappear into the bottom of a crevasse. 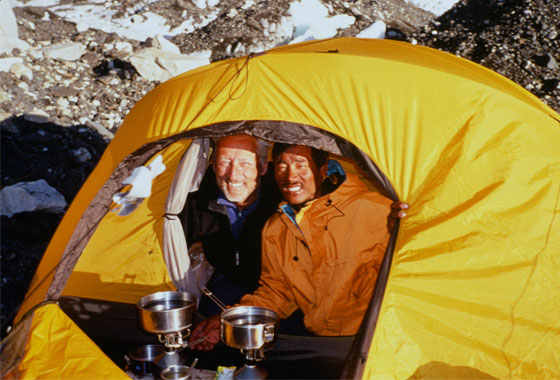 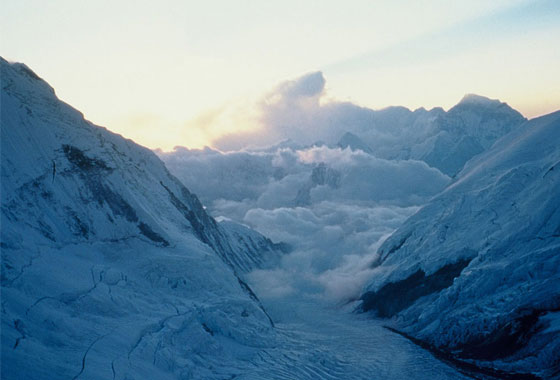 Camp III. The world's worst campsite! 7 400m. On the steep slope of Mount Lhotse, we carve out a place with shovels and picks to create a small platform for the tent. In the midst of an avalanche zone and at an altitude close to what is called the "Death Zone," you don't get much sleep or relaxation here. Sherpas refuse to sleep at Camp III... They prefer to leave Camp II during the night and go directly to Camp IV. Quite a trip! 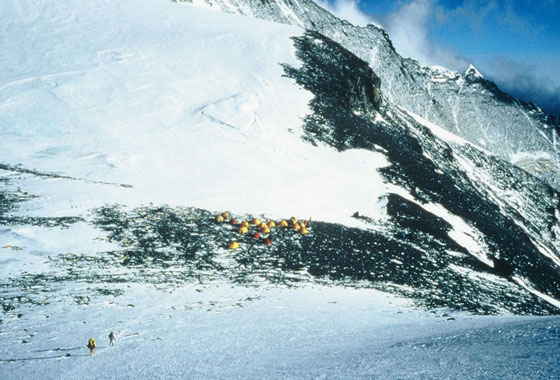 Camp IV, 8 000m. The South Col, the highest col on Earth! By this time we are so breathless and exhausted, frozen and sleepless, with no appetite... it's hard to find anything good to say about this spot! It's in the middle of the "Death Zone," where human bodies can no longer adapt because of the lack of oxygen. People often say the place is polluted, and it's true that there are always oxygen bottles and remains of tents. But the ground is cleaned year after year and soon it will be back to normal. The bodies of some climbers remain here, though, for eternity. 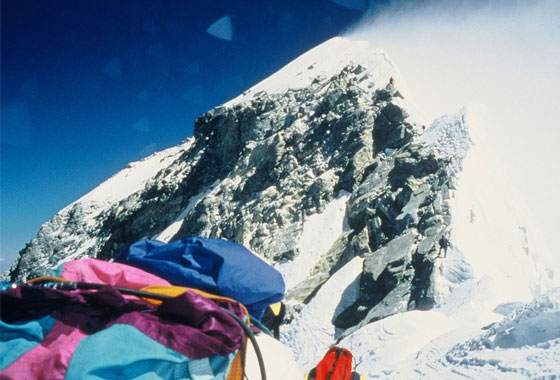 The summit pyramid of the Roof of the World. This is a risky part before reaching the summit, 150m higher. Very powerful gusts sometimes roar in from the Tibetan side, to remind us that we are at the height of the jet stream. The snow is very fragile, and it's terribly cold. Many climbers turn back when they see the Hillary Step, in the middle of the route across the ridge: 8 metres straight up, on smooth rock, named in honour of the first climber to reach the top of Everest, Sir Edmund Hillary, accompanied by Sherpa Tenzing Norgay. No use looking up when you get to the top--the whole world is at your feet. 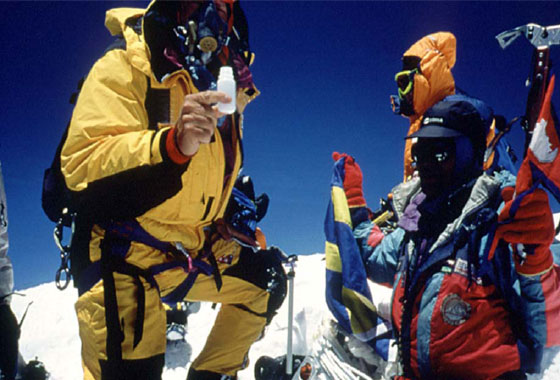 After setting foot on the summit of Everest, Bernard was invited to sign the prestigious “Everest Summiters Club” board in Kathmandu. Bernard’s and Dorjee‘s signatures are now inscribed next to those of Hillary, Rob Hall, Messner… 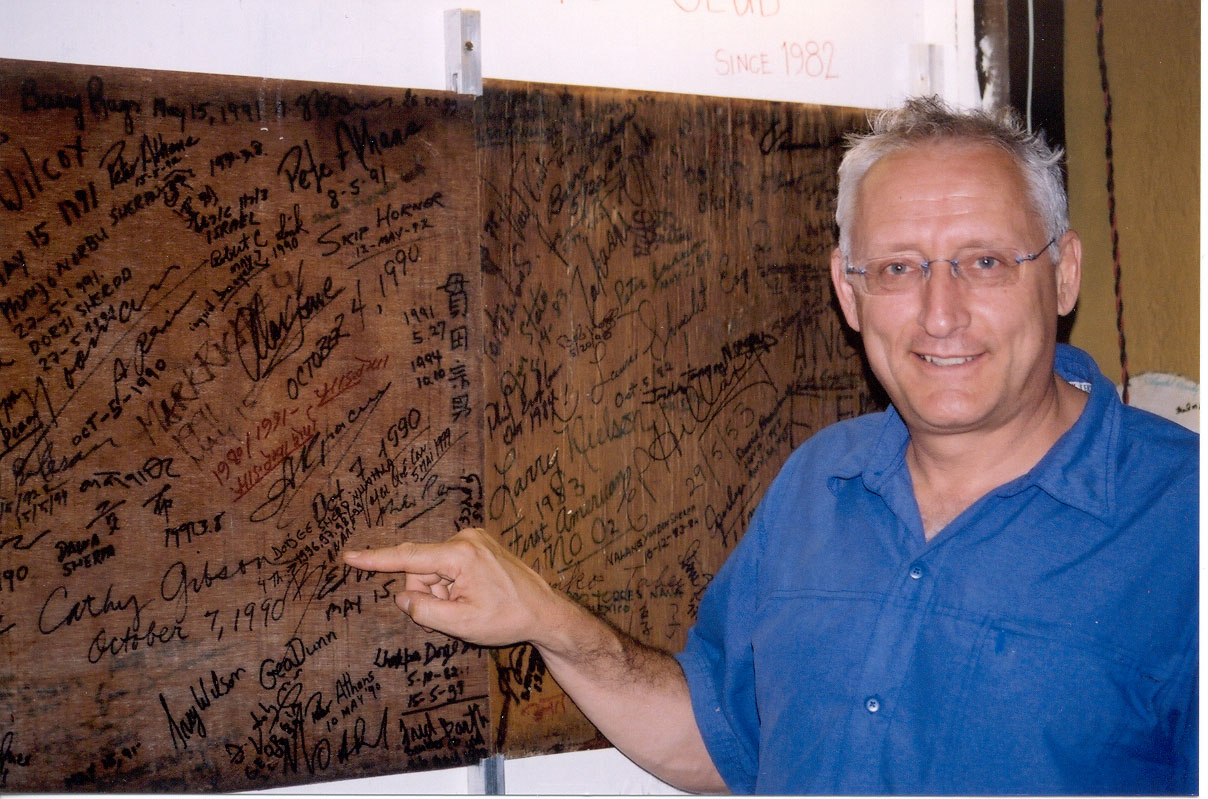